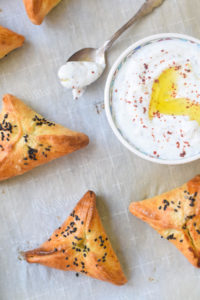 It’s funny to think about pumpkin — a New World crop — as a Central Asian ingredient, but if you have ever been to a Afghani restaurant, you have probably seen a sautéed pumpkin appetizer known as kadoo bourani. Indeed, in her beautiful cookbook, Taste of Persia, Naomi Duguid points out that pumpkin is used as a vegetable throughout the Caucasus countries, Iran, and Kurdistan.

These pumpkin pastries traditionally would be served as an appetizer or a snack — something to nibble on with a cup of tea. There are many kinds of bishak, including meat and cheese, but the pumpkin-filled ones are a Bukharian specialty. The dough for the pastries is very similar to a pita dough. It’s quite forgiving for those of you who fear yeast. Once baked, the edges of the pastries are appealing crispy, but the inside stays chewy. However, the pastry shell should be quite thin, not doughy.

The filling is made with onion and mashed pumpkin seasoned with warm spices like cumin and cinnamon and a bit of red pepper flakes for heat. I think pumpkin needs a bit of sweetener to counteract it earthiness, so you will notice a bit of brown sugar in there as well. But trust me, these pastries are savory, not sweet.

It is not traditional to serve pumpkin bishak with a sauce. While they are perfectly lovely all on their own, I think that a drizzle or a dunk in the yogurt sauce adds both moisture and a welcome tanginess. And, yogurt and pumpkin is a pretty typical combination for Central Asia. If you can source nutty, oniony nigella seeds for sprinkling on top of your pumpkin bishak, they are a terrific complement to the onion in the filling. Black sesame seeds work as well, but I am partial to the peppery bite of nigella seeds.

This recipe is a bit involved, but it makes a lot of bishak — perfect for a party. Also, once baked, the bishak freeze well. Simply thaw and reheat before serving.  Pumpkin bishak is a perfect savory autumn snack or cocktail party offering. I hope you are tempted to give it a try!